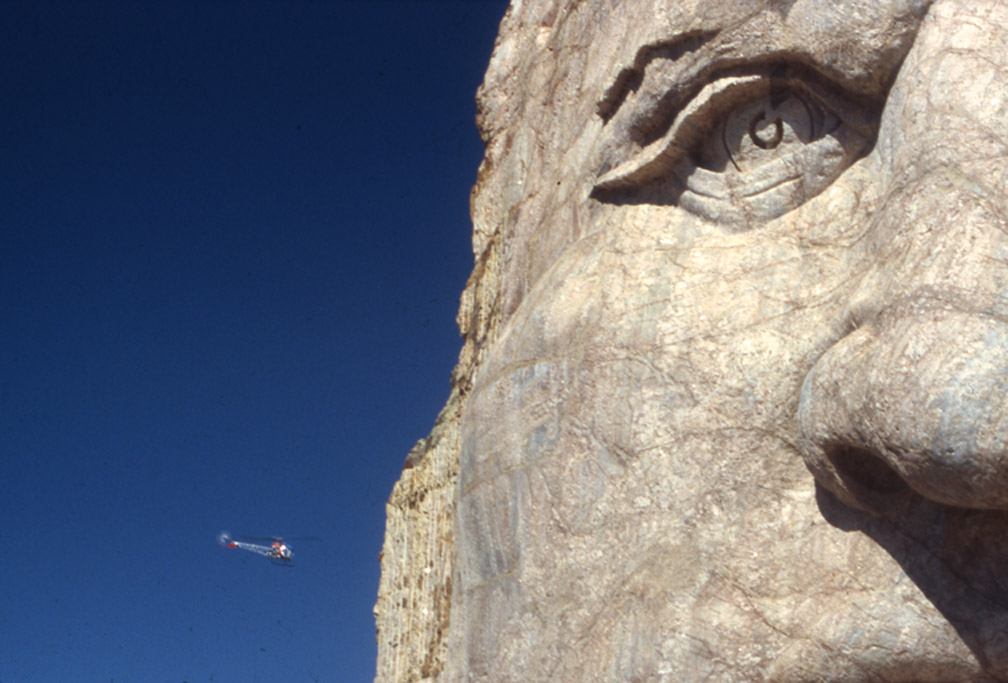 “Be careful, if Crazy Horse needs to sneeze,” warns Jim Hattervig and distributes protective helmets. This remark is not meant entirely seriously – but you never know. After all, the nose above the visitors´ heads provides easily space for the engine of a jumbo jet. The helicopter, which appears to the left, compares in size just like an annoying fly. No wonder, with these dimensions: The man’s face alone is as high as a nine-story residential building; the size of the horse’s head is equivalent to 22 floors and, on the outstretched arm, there is space to fit about 4000 people. Overall, the monument has a height of 172 meters / 510 ft and is 195 meters / 585 ft long – some day in the future; it will be the largest man-made sculpture.

Emerging here in the midst of the Black Hills of South Dakota is a monumental project in the truest sense of the meaning. For six and a half decades, work on the Crazy Horse Memorial is in progress: drilling, blasting and chiseling. The face of the legendary Indian leader was completed in 1998; the horse’s head is about halfway through. The rest … is only recognizable in rough outlines. Completion will still be a long way down the road – even if it is repeatedly announced for “Monday”. Casimir Ziolkowski, who has worked at the Memorial with his shovel since the age of six, cannot resist a laugh when thousands ask the respective question. He does not want to set a specific date: “I cannot give an estimate; I don’t even know whether it will be later this century. We continue to work as long as we work. There is no time pressure. There are too many people who believe in this project.” Besides this monument, there are more projects to be done. “Korczak has always dreamed of a university,” said the initiator’s widow Ruth Ziolkowski in 2012, which at the age of 85 years still had the reins on Crazy Horse Memorial itself. “Mrs. Ruth”, as Ruth Ziolkowski was affectionately called by everyone, sadly passed away in May 2014. The project is now being continued by her children.

Meanwhile, accommodations were built, and the Indian University of North America offers their summer courses on the premises. This also includes a modern visitor center with two cinemas, where documentaries about the development of the Crazy Horse Memorial are shown regularly. Much space is reserved for the Indian Museum of North America with its exceptional and varied collection of art works, representing the history and culture of different Indian tribes. In the studio and home of the initiator Korczak Ziolkowski visitors can take a look behind the scenes.

While the presidents’ heads on Mount Rushmore 30 kilometers / 19 miles away were created within 14 years by 400 workers, Crazy Horse, just outside of Custer, takes considerably more time. This is mainly due to the fact that Ziolkowski deliberately refrained from public funds and – in the early years – mostly relied on his own labor force. For quite some time, the pace of work has increased significantly; on one hand, because patrons and sponsors have donated modern machinery and amounts of several millions dollars. On the other hand, it is also because the crew of several men operates in substantially the same line for almost 20 years, they can now draw on their diverse experiences.

Jim Hattervig is responsible for those of the one million annual visitors who want to look Crazy Horse straight into the eye. For a few dollars, most people are taking the ride to the foot of Thunderhead Mountain in an old school bus. Here they get at least a glimpse of the work, hardship and expense, but also dangers of courage and assertiveness that lie in this project. Another opportunity to get close to the stone face arises in June every year, during the annual People’s March. The procedure is similar to a popular hiking in Germany, the “Volkswandertag”. For a small fee, you may take a 10 km / 6 mile hike through the forest all the way up onto the arm of Crazy Horse and back – impressive sights and insights are included.

Jim’s explanations cannot hide his admiration for Korczak Ziolkowski. The sculptor with Polish ancestors – in the early days, Korczak’s son recalls, the people in the region referred to Korczak as “the crazy Pole” – has initiated and put forward the project together with his wife Ruth and their ten children, virtually alone. Since Korczak’s death in 1982, and Ruth’s death in 2014, some of their children continued.

Ziolkowski received a letter from Chief Henry Standing Bear in 1939. “My colleagues and I would like the white man to know that the red man also has great heroes,” the Sioux chief wrote to the artist, who in the same year was awarded a prize at the New York World’s Fair. Ziolkowski had briefly worked on Mt. Rushmore, and now he was chosen to return to the sacred mountains of the Sioux Indians and create a monument for the native population.

When searching for a suitable role model, Crazy Horse was chosen. “Crazy Horse was never injured in the fight against the whites, never was taken prisoner and never took a pen in hand to sign a contract,” says Jim. “As survival in freedom became more difficult because of the lack of wild animals, he led his people into the reservation to Nebraska, where he was killed by a soldier with a shot in the back.” That was on September 6, 1877 – to the day 31 years later, Korczak Ziolkowski was born in Boston, MA.

“Where is your country now?” Crazy Horse was mockingly asked by a settler. The chief pointed his left arm over his horse’s head and replied, “My country is where my dead lie buried.” Ziolkowski chose this event as motif for the Memorial. No word yet of its gigantic proportions when Ziolkowski traveled to South Dakota in 1946, in search for a location. The monument should be 30 meters / 90 ft in height, and take 10 years to be completed. While building a log house for his family, Ziolkowski realized that a monument of this size would look to meager on the 200 meter / 600 ft high granite wall. So, he decided to work the entire mountain. At the age of 37, he had decided for a Herculean task: “This project was started with 174 dollars in his pocket and a dream. See where we are today, how far we have come,” said Korczak’s widow Ruth, back in 2012.

1948, with the first blast, ten tons of rock were removed – nowadays there are sometimes more than 1000 tons per blast. Overall, there are likely to be ten million tons up to today. “Korczak worked alone, had to blow up, plan, build homes and roads and carry the necessary material 741 steps up a ladder. If the equipment failed, he had to go down to crank up the compressor and make it work again”, explains Jim Hattervig.

1954 Korczak acquired a used bulldozer. To give an impression to the population, “his children had to paint the outlines of the project onto the rock, hanging in ropes from the top of the mountain. More than 600 liters / 150 gallons of paint were used for this.” Jim also about the Flying Cat, an anecdote from forty years ago: ”As Casimir Ziolkowski, one of Korczak’s sons, wanted to remove rocks after a blast, a bolt broke, and the bulldozer with Casimir in it slid down the slope. Korczak feared the worst, but when he discovered that his son was unhurt, he sent him to bring the machine out of the morass and clean it.” The now 66 year-old Casimir remembers his story quite well. The bulldozer had crashed repeatedly against stones and trees: “It was fun. Once I had reached the bottom, I got out and went home.”

Both the bulldozer and Casimir are still employed at the Crazy Horse Monument. The work is physically challenging, although the equipment, such as drills, is nowadays easier to use. 1987, Ruth ordered to move the focus of the work from the horse’s head to the face of the Crazy Horse. This was a wise decision, because now the progress has been visible more quickly for everyone – especially during a trip out to Crazy Horse’s arm. The strong impression of the precisely detailed and sculptured face seems to have a penetrating look. Jim gives some facts and data to the sculpturing work. Casimir required almost three months for the left eye; however, for the right eye it only took three weeks. Working at the face of Crazy Horse took roughly ten years, using a 2300 degree hot gas torch for the fine and detailed work. Hattervig: “That torch is so hot, that no flame can be seen – but the noise it produces is as loud as a jumbo.”

For several years now, the focus lies on the completion of the horse’s head. This will be the largest portion of the entire three-dimensional monument, completely built around the mountain: 66 meters / 200 ft in height! Hence the completed monument will be several times larger than Mt. Rushmore. However, the former governor of South Dakota, Mike Rounds, does not like the idea of rivalry between the two monuments: “Mt. Rushmore is American history, while Crazy Horse reflects the history of Native Americans, the Indians. But it is also the story of a family living in South Dakota who had a vision, and who is not afraid of hard work to accomplish this vision. You should see both monuments in conjunction.” 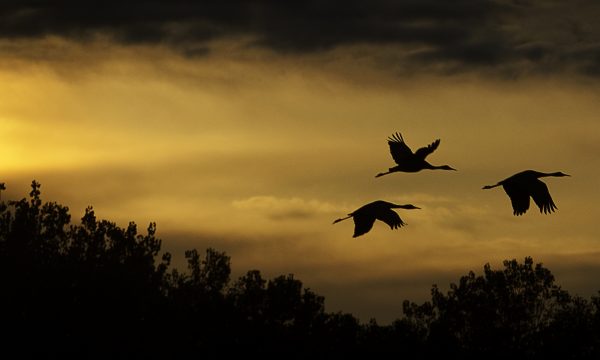