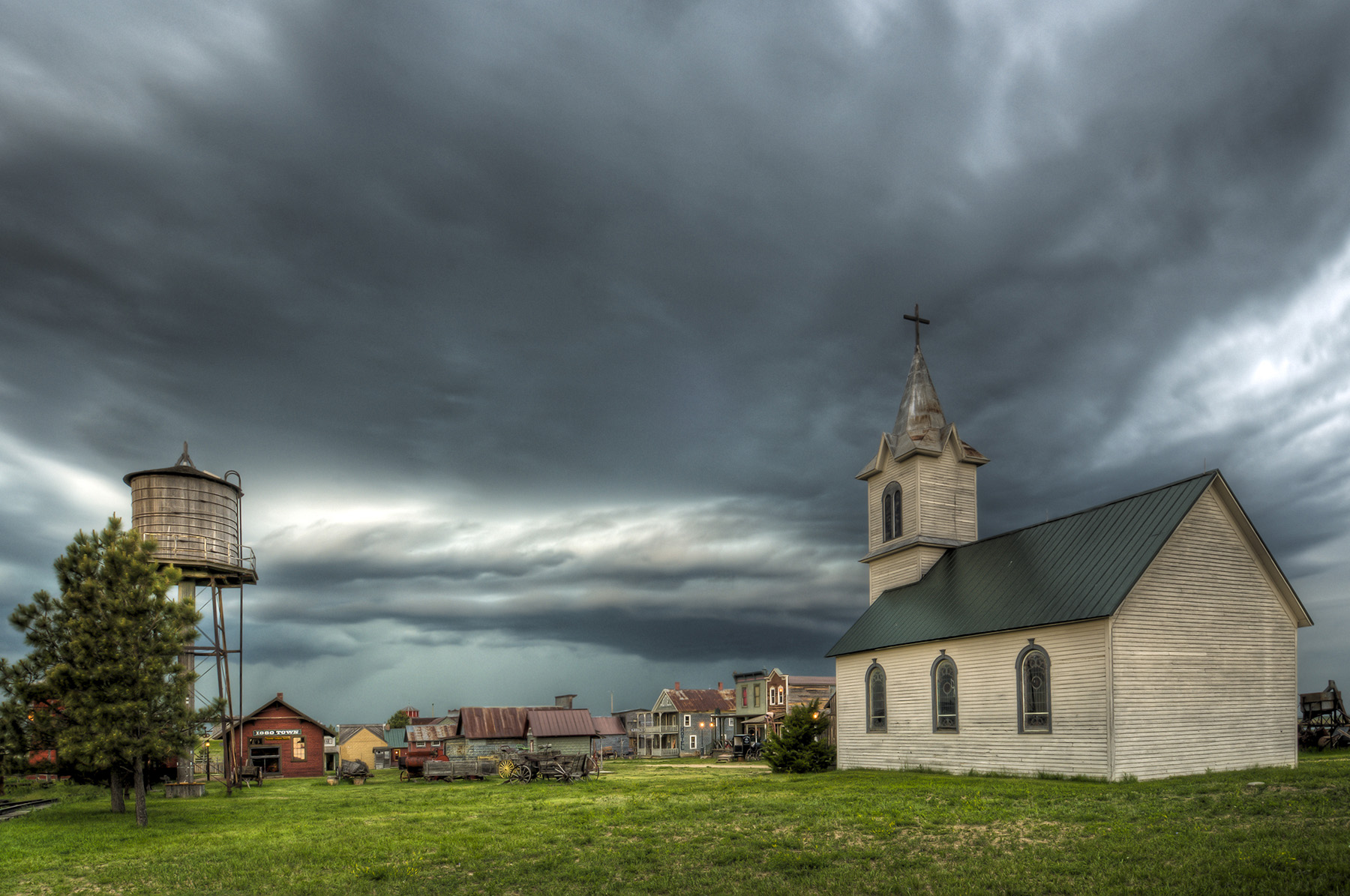 South Dakota is known primarily for its history carved in stone – to be more specific, the Mount Rushmore National Memorial with the four heads of Presidents George Washington, Thomas Jefferson, Theodore Roosevelt and Abraham Lincoln; and the monumental Crazy Horse Memorial, which is still being chiseled, hammered and blasted to completion.

However, the state has plenty of other attractions to offer its visitors. From Native American culture, to mountain forests and outdoor sports adventures, to the history of the Old West. The diverse landscape, huge granite boulders, fragrant mountain forests, wide rivers and miles of open space take everyone’s breath away. Visitors feel a sense of freedom and adventure that Europeans in particular associate with the Wild West. Everywhere one encounters places where the heritage of the “old days” is still preserved.

An example of this is the western town 1880 Town. It is a small oasis somewhere in the middle of nowhere. It is not, as is often assumed, a former town, but an open-air museum assembled piece by piece with more than 30 buildings and countless relics from the Wild West era, lovingly and passionately embedded in the fascinating prairie hills of the area. 1880 Town is located about 20 miles west of the town of Murdo in Jones County on Interstate 90. 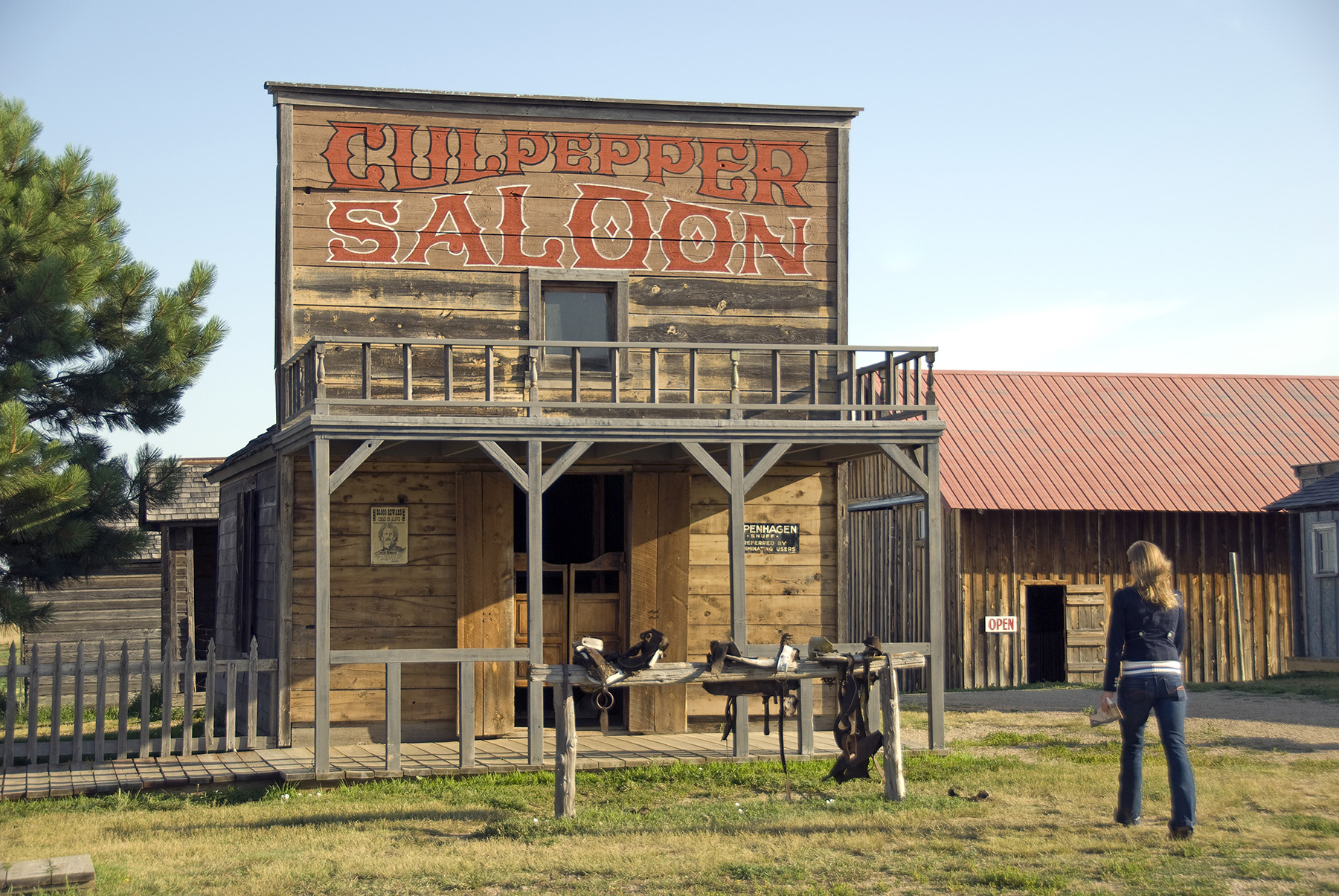 Endless prairies, a herd of trotting buffalo, sporadically growing cacti on the sandy roadside and in between lots of Indians and cowboys. You also hear mooing cows, galloping horses and an old, rusty stagecoach racing through the desert to shake off its pursuers. There is shooting and fighting. In most western towns, the wind howls through empty alleys. There’s always a bad guy on the loose somewhere, there are always Indians to be chased off, and the sheriff always has some dispute to settle. In addition, the theme music from a legendary cult series resounds in our heads: “Dam dadda dam dadda dam, Bonanza!” This is exactly how it looks in the Wild West – at least in the film.

Wild West towns develop their own charm and attract a large number of visitors. Beyond the consumerism of the major cities in the U.S., there is a following among tourists who prefer places that stand in the shadow of former glory. Railroad stations to which trains no longer run, empty mining camps, and abandoned farms with windmills. It goes in search of relics and evidence of a bygone era. If you want to find out how wild the Wild West really was, you can do so in the Western Town 1880 Town. Here you can find all the answers to questions about cowboys and gunslingers, Indians and Indian tribes, trappers and settlers, rights and laws.

It all started in 1969 when Richard Hullinger invested a little money, bought a piece of land and just wanted to see how the situation would develop. In 1972, a Shell gas station was built on the property, with the idea of perhaps adding a small Wild West attraction for tourists in the future. Shortly after its opening, a movie location scout toured South Dakota in search of suitable movie backdrops. The planned “flick” was to be set in the era around 1880. Richard Hullinger’s land turned out to be the perfect filming location. In addition, his father Clarence’s passion for collecting paid off, as he owned numerous treasures from the Wild West era, which he made available to the filmmakers. 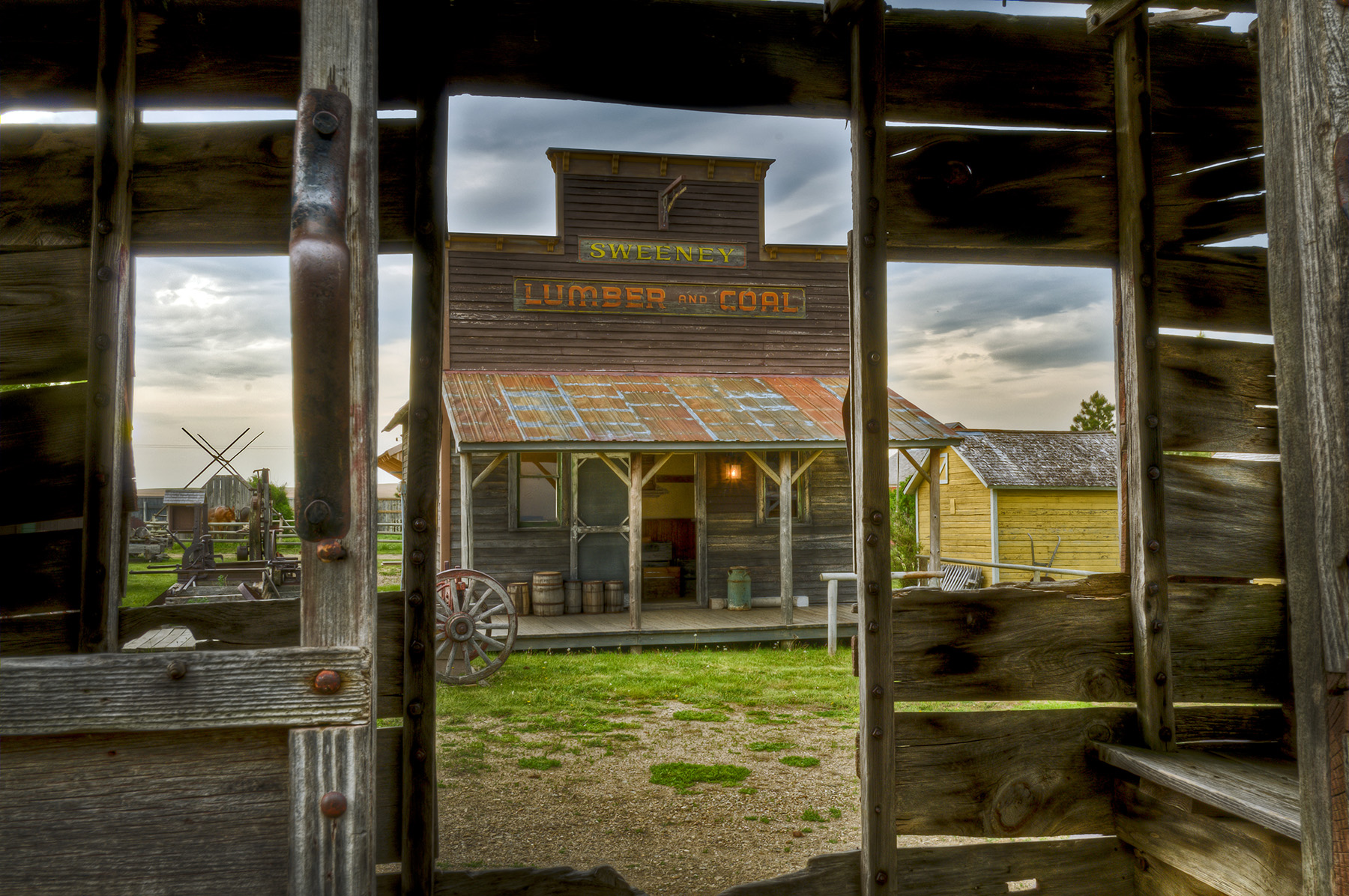 In no time at all, the film production set up a street backdrop with wooden buildings, which was used as the main scenery for several months. When winter came, the film crew left and retreated to studios for indoor filming. As a small host gift, Clarence Hullinger was given parts of the film town. The western, released under the titles “Hex, Charms” or “The Shrieking” did not become a big box office success, but the 1880 Town project was crowned with success from the beginning. Father and son Hullinger acquired more land, developed a marketing plan and a western town was born.

The development of the new settlement should extend mainly in the period between 1880 and 1920; as always, there are a few minor exceptions. One of these is the “50’s Train Diner,” a 1950 Santa Fe Railroad train that chugged from Chicago to California. You’ll get wanderlust when you sample one of the delicious pies in the dining car while examining the memorabilia of the past. 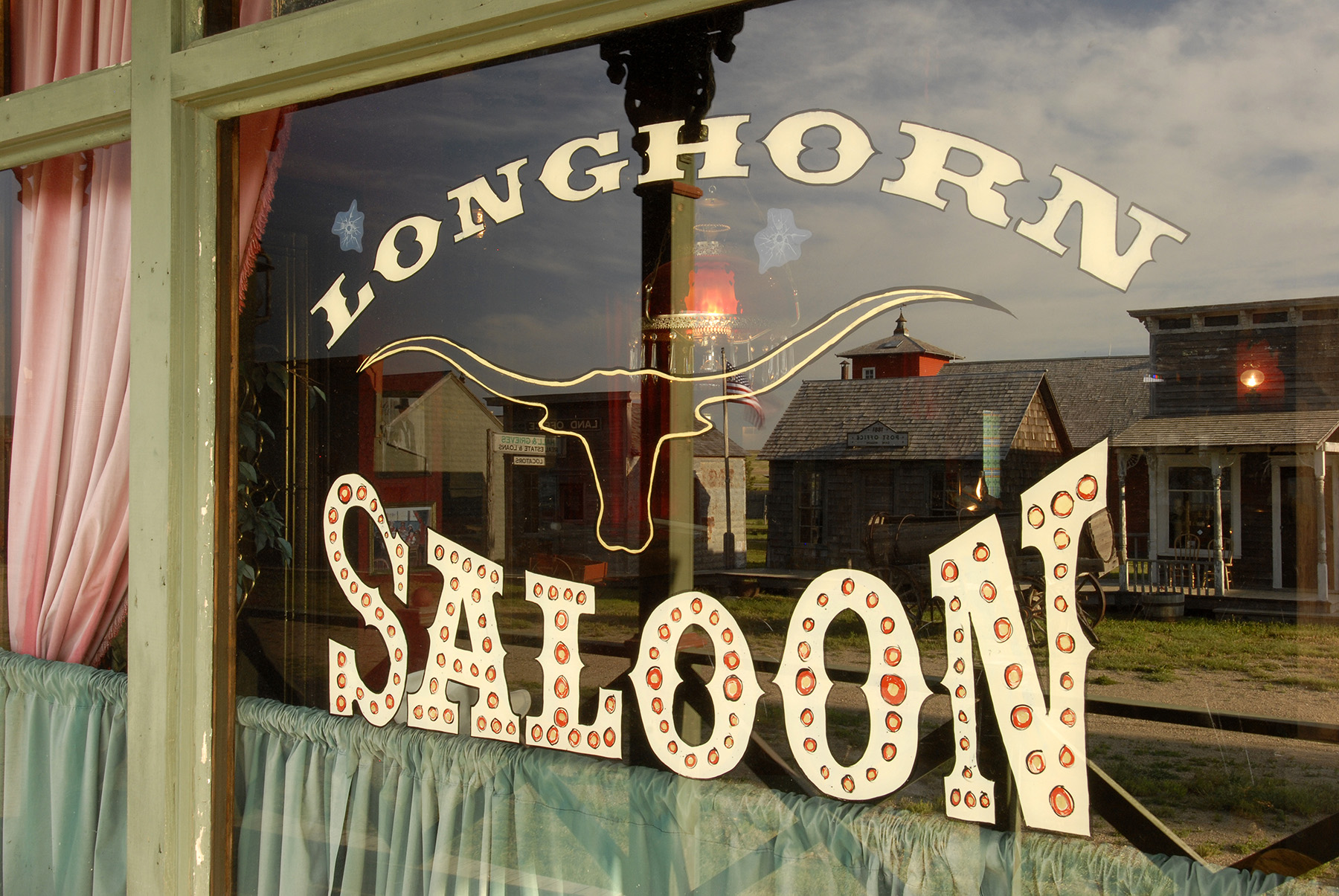 Well-preserved buildings were either completely transported or dismantled from surrounding towns, then restored and rebuilt to scale in the museum town. The church, St. Stephen’s Church, comes from a small community called Dixon, South Dakota. Originally built in 1915, the gem with original windows now stands in 1880 Town and the old tower bell may be rung at any time. The move required several permits and all the local politicians in the area had to lobby for the project. The hotel building originated in the village of Draper, population 125. Original prints of cowboy spurs can be found on the wooden stairs. The train station and telegraph office were moved from Gettysburg, South Dakota. “Express Agency” or “Pony Express” was the name given to the post office of the time, which found a new location on Main Street. The mail carriers rode across the countryside for a distance of 2,000 miles. The entire route, which included 153 stations, required 75 ponies and 40 riders, who were changed every 190 miles. The job was extraordinarily dangerous because hostile Indian attacks had to be expected again and again.

There’s one fun thing you can’t miss in 1880 Town. Costume rental costs five dollars per person, and in no time at all you can become a real cowboy or cowgirl. The costume includes accessories, which, however, also come with fixed rules, e.g., the cowboy hat, which is only removed in church, at funerals or in the presence of a lady. Around the neck the cowboy ties a bandana, which served as protection against dust or as a bandage. The boots are characteristic, tapered to the front and high-cut, so that no dirt gets inside, at the heels are the spurs. The lasso, made of plant fibers or leather, must not be missing in the daily work. Cool, brave, strong, wide-legged gait, of course a revolver in the belt and always looking for freedom and adventure, that’s how the life of a cowboy is described. But the reality in the Wild West era was different.

Cowboy actually means “cow boy” and this one sat all day on a horse, usually not his own, to herd cattle. But in 1880 Town, everyone is allowed to live out their dream. If you’re strolling down Main Street in costume, you should also make a detour to the Longhorn Saloon for a cold Sarsaparilla. The non-alcoholic soft drink is made from the root of the sarsaparilla plant, which is even said to have healing properties. The saloon also offers live entertainment from piano to dance and snacks such as beef jerky, peanuts and popcorn. Those who want to live out their artistic talents are welcome to give free rein to their creativity on the stage. 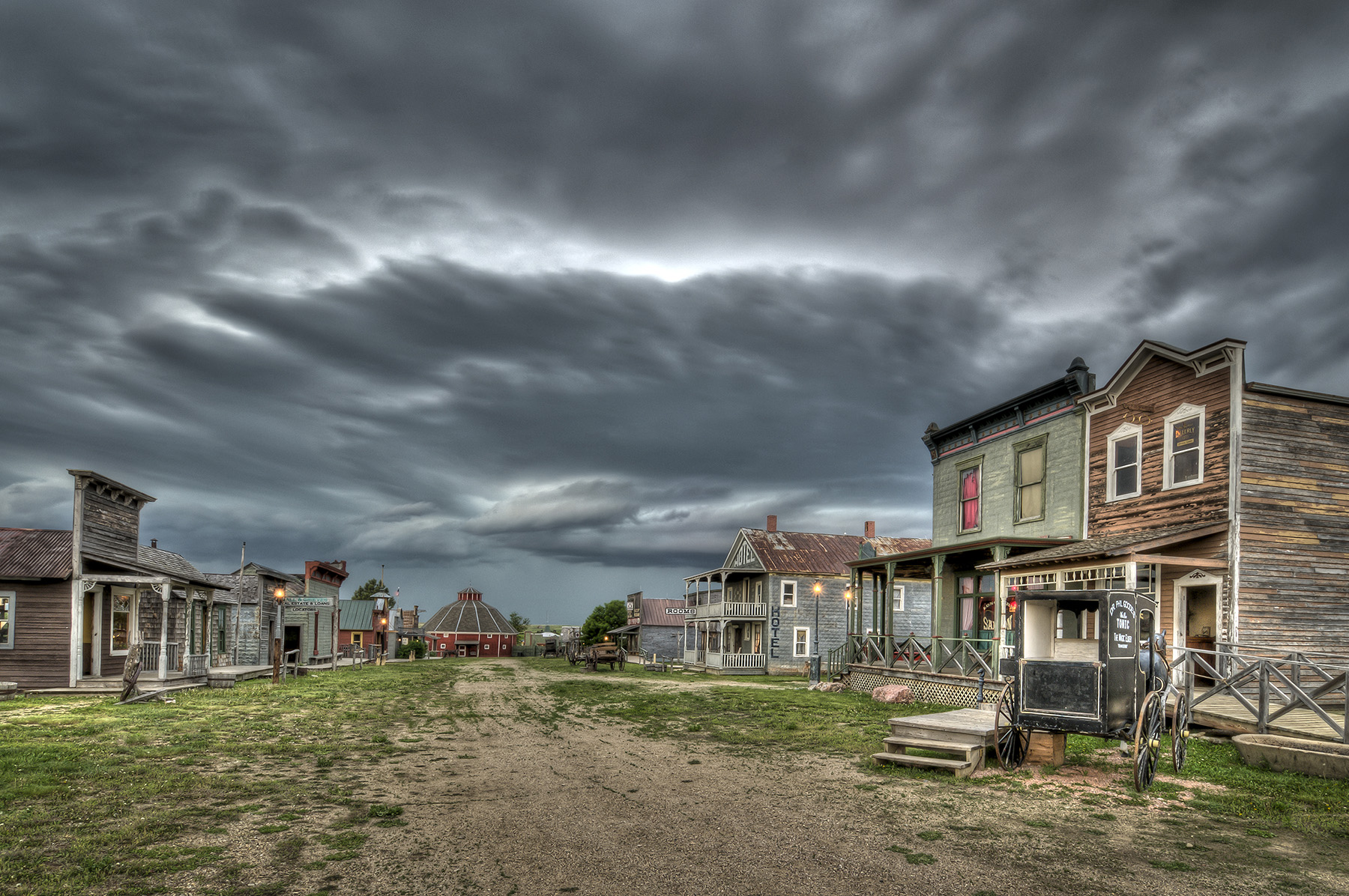 During the tour of 1880 Town, you will come across decorations from the Hollywood film success Dances with Wolves, which won seven Oscars and is also immortalized here. A grass-covered house, tents and all sorts of equipment can be admired up close. Buck, one of the horses Kevin Costner rode in the movie, spent his retirement years on the grounds until he died at the age of 33. There is a memorial for him at his burial place in the 1880 Town.  For two and a half months, the film crew traversed locations scattered across the state. Residents of South Dakota are very proud that their land contributed to the backdrop of a successful film. Richard Hullinger was particularly impressed by the fact that it was not Hollywood glamour but hard work that defined the lives of the actors.

What drives a man to become a professional cowboy? Casey Tibbs, one of the most famous rodeo riders in North America, has the answer: “The challenge”. His life was horses, with or without a saddle. He knew what it felt like to hold onto the bare back of bucking horse. He died in 1990 at the age of 61. His life continues to be honored in the Western town. At the Casey Tibbs Museum, you can browse through unique and original artifacts of his career.

Those who have tired feet in the meantime can relax and sit in the carriage and be transported to the farm, which is barely a quarter mile away. The area with the farm offers everything you imagine under a real backdrop from a bygone era. Windmill, well, main house, stables and the associated horses, chickens, longhorn cattle and not quite in keeping with the style – a camel. Why a camel? There are two reasons: Father Clarence Hullinger was a fan of the “U.S. Camel Corps,” a U.S. Army unit raised in 1856 that used camels as pack animals. After the end of the American Civil War, the Camel Corps was disbanded and the animals went into private ownership, some of them to South Dakota. In the southern part of the state in the small town of Pukwanda, there is still a breeder today. In addition, Clarence is a great collector and one of his favorite items is antique camel bells. One day he was surveying his collection, called his son and said, “Just wanted to tell you, I’m going to buy a camel, I already have the bells!” Otis, as the exotic is called, is one of the favorites and especially sought after by the younger guests.

For cowboys and cowgirls young and old, and anyone who wants to breathe a little Western air, 1880 Town is an ideal place to bring a bygone world back to life. The Wild West and cowboy adventures become the inspiration here, even though the myth is constantly challenged, even in the U.S., because the horse has now been exchanged for the horsepower of an all-terrain vehicle and the revolver for the cell phone. 1880 Town is a piece of living history. Visit the saloon, knock on the sheriff’s office, look at the jail best from the outside only, beware of a gunfight and enjoy the Wild West metropolis with all its diversity. Richard Hullinger, whose paternal and maternal great-grandparents are from Germany, says there’s only one way to get to know 1880 Town: “Don’t make long plans, just pack and go!” 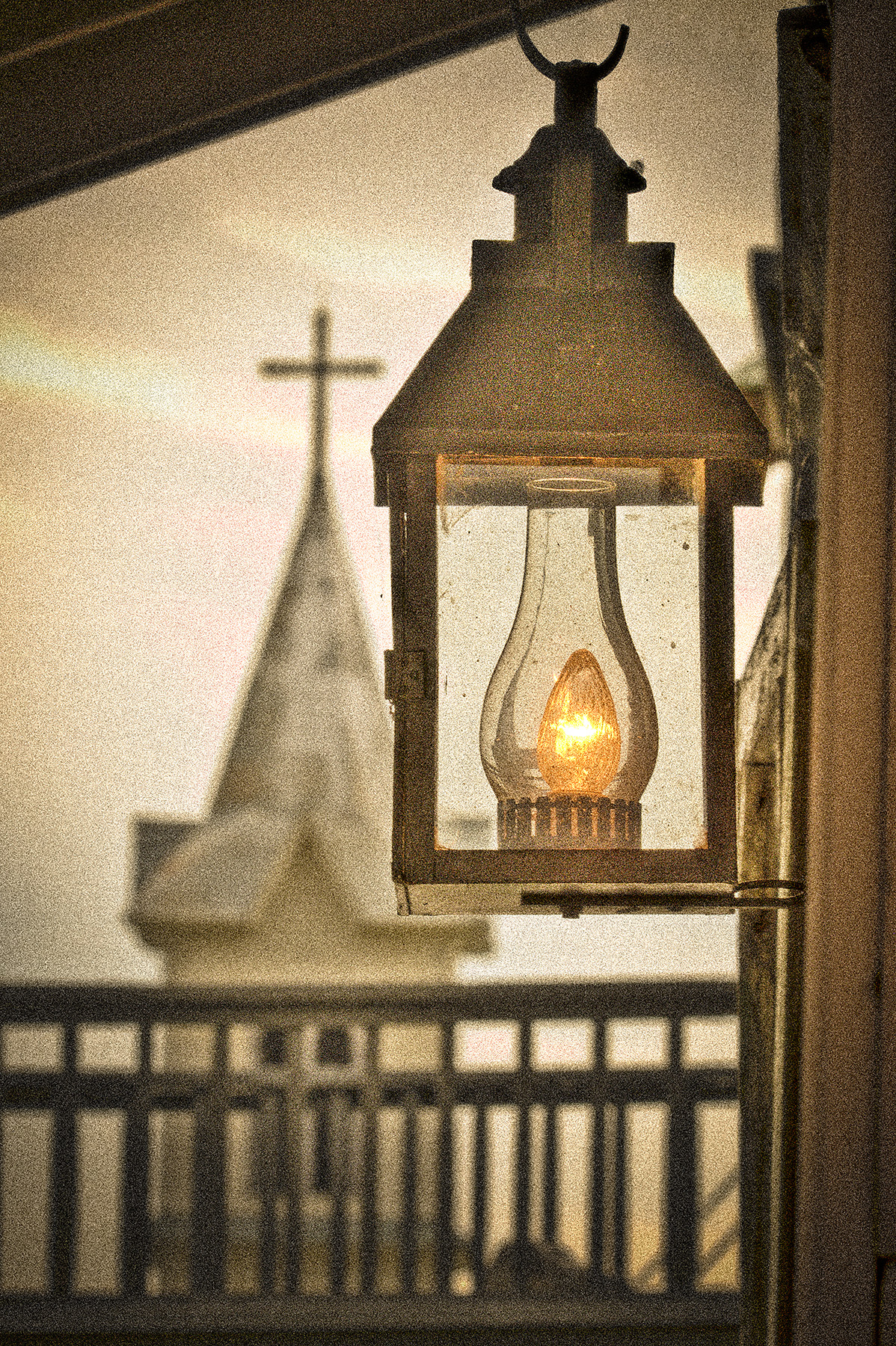 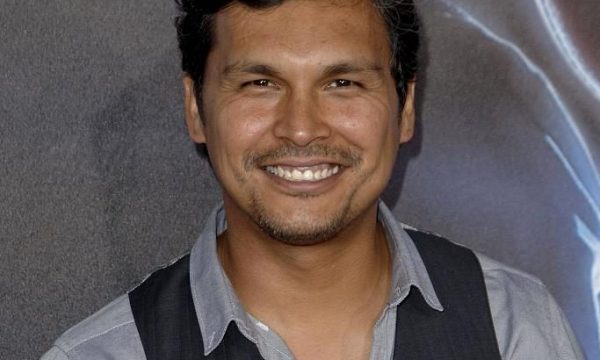 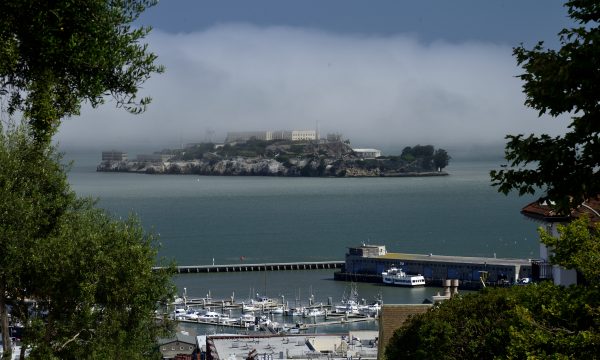